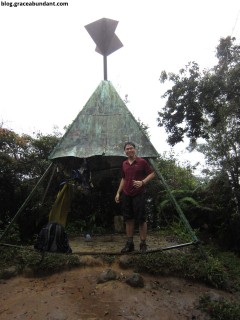 After my 1st attempt at climbing Gunung Nuang and failing, I have been itching to go back and try again. Many non-outdoorsy people who have climbed Nuang before may think I’m crazy – after all, what does Nuang have to offer besides a long, boring road and leeches? Surely I could just jog around the field outside my house for the exercise, right? Well, read on to find out what Nuang had in store for the 2 of us who finally made it up to the summit this round!

Warning: This write up is more of a story than just information about Nuang! If you just want information, the GPS details & Preparation sections will interest you more.

After my 1st attempt at climbing Gunung Nuang and failing, I have been itching to go back and try again. Many non-outdoorsy people who have climbed Nuang before may think I’m crazy – after all, what does Nuang have to offer besides a long, boring road and leeches? Surely I could just jog around the field outside my house for the exercise, right? Well, read on to find out what Nuang had in store for the 2 of us who finally made it up to the summit this round!

First of all, my reasons for climbing Nuang:

Weirdly enough, I wasn’t even supposed to have climbed Nuang on this particular day – I was scheduled to climb Gunung Rajah with my friend Lee YK on a 2 day 1 night trip (24-25 September). However, we had to cancel the trip as we weren’t allowed into the trailhead, even though we were all packed and drove all the way there. So, we decided instead to tackle Gunung Nuang, which would be my 2nd attempt, and YK’s 3rd summit attempt. Both of us really wanted to conquer Nuang at some point, so why not now?

Well, Nuang was not going down without a fight!

On Wednesday (the 26th) morning while I was still sleeping, I was awakened to the sound of thunder, and it shortly started raining hard. By the time I rose at 4.20am, the rain had subsided to a drizzle. I texted YK asking whether we should still attempt Nuang. We decided to go there anyway, and to turn back if necessary. (I’ll be honest – for the 1st half of the climb I expected to have to turn back not reaching the summit) By the way, I should note that I generally never recommend climbing with just 2 people. At least 3 is always a good thing.

We drove in a heavy drizzle and got to the base of Gunung Nuang at 5.50am. Nuang begins with a 5.8km wide road which gradually goes up and down, gaining altitude from 190m to 500m. Armed with my trusty flashlights (2x 4sevens Quark 123^2), we entered the trail at 6am, by which time the rain had stopped. Regardless, the place was unbelievably humid and warm (being at a relatively low altitude), thus the going was hot.

Just 10 minutes into the climb, the rain started again. I turned to YK and was going to say “I think we should turn back”, but instead just asked him what he thought. He was game to carry on, so we donned our raincoats (YK’s poncho was pretty much just like a large plastic bag); I stole YK’s rain cover for my backpack, and continued. However, just a few minutes later, we were both overheating from having raincoats on, while still being wet (the sweat and water was not evaporating), so we took them off and decided to just continue in our regular clothing. We did get wet, but it was much cooler! (Also, the rain was just a mild drizzle at this point)

We reached the end of the “never ending road” (an oxymoron?) +01H:17M (6:27am), at an altitude of 511m, quickly eating some peanut butter sandwiches for breakfast. (At this junction, KEEP LEFT to continue along the trail. Do not go down the steps to cross the river, even though the trail on the opposite side of the river looks more inviting!)

We continued, crossing a total of 5 rivers (all of which can be crossed with shoes on with ‘normal’ water levels, although you’d better be careful not to end up with wet feet!). The water levels were slightly higher than the last round, but still manageable. We reached the big Kem Lolo hut at +01H:31M (6:41am), where I reapplied insect repellent, left 1 liter of water for the return journey, and we continued.

The path between Kem Lolo and Kem Pacat was pretty muddy, with many pools of water collecting. However, I didn’t think it was too bad. Since we were ahead of schedule, we took a more relaxed pace with regular breaks so that we wouldn’t wear ourselves out. We were on a strict lookout for fallen branches, as YK had badly bumped his head the previous round. Needless to say, he avoided it this time! The drizzle was light all the way up until Kem Pacat @ 1095m, which we reached at +03H:22M (9:32am), half an hour faster than our last climb, even with the slippery slopes. (On the last climb, I was not nearly as fit, and was constantly huffing and puffing all the way to Kem Pacat even though I had offloaded ~3kg of water & gear to my friends!) I knew at this point that once we pushed onwards, we would try to summit no matter what, having come this far.

After eating more peanut butter sandwiches, we pushed on towards Puncak Pengasih (the false peak). Nuang unleashed a new weapon upon us – heavy rain! The trail quickly became a small stream, with water flowing everywhere. Soon, we were wet beyond caring, such that we would just step in puddles without thought, since our feet couldn’t get any wetter! The terrain after Kem Pacat also becomes a lot steeper (which makes me glad I stopped at Kem Pacat last round when I was much less fit), so we took our time and trundled on towards Puncak Pengasih @ 1475m, which we reached at +04H:45M (10:55am). Thankfully, the rain started to slow down at this point, but Nuang did not back down – we were hit by a gale force wind, which I have never felt before in Malaysia, and in fact did not believe that such winds existed. I was in fact worried that some branches may fall down on us. The good thing is that for most of the time, the trees really reduced the amount of wind which actually hit us.

Neither of us had ever been beyond Puncak Pengasih (the place where YK turned back on the last trip), so we were on an unknown path from here on. The terrain between the two peaks is actually not too difficult – the descent & ascent to the valley in between the peaks is very rocky. In the middle of the valley, it’s mostly sandy/soil, which in our case meant huge pools of water, which we just stepped in because our feet were soaked.

However, Nuang wasn’t going to give up that easily! Just 5 minutes before the real summit, we came across a tree which had fallen across the path. There was a huge wasps nest on it, which was thankfully empty. However, there were a lot of small branches blocking the path, a few of which were covered with hundreds of ants. Just a minute later, I felt a sharp bite on my hand, and found a tiger leech (different from the normal leeches whose bites don’t hurt) which had just bit me! I quickly removed it, and sprayed it with insect repellent for good measure, so it wouldn’t return. To be honest, coupled with a few ant bites and the fallen tree, I was ready to turn back at this point. However, YK said he’d take a look, and promptly crashed his way through the branches. Nothing was to stop him!

Indeed, at +05H:26M (11:36am), I noticed the tree cover thinning, and we emerged onto the summit @ 1493m. I can hardly describe the feeling of reaching the summit after a long slog through the jungle. It feels like you’ve won the most important race in your life! It was AWESOME. It was also VERY windy and cold. Originally we had planned to eat lunch at the summit, but (1) we were ahead of schedule, and it was still early; (2) it was really cold, and we wanted to get back under the cover of the trees from the wind; and (3) I knew there was more rain forecast for the afternoon.

We quickly ate some snickers, snapped some photos (no rain at that point of time, thankfully!), and headed down, squeezing back through the fallen branches. We reached Kem Pacat at around +7hrs (1pm), where we ate the best tuna sandwiches ever. We didn’t linger, and headed back down towards Kem Lolo, taking a few slips and falls along the way. It did start to drizzle again, and the jungle was very dim. We reached Kem Lolo at ~ +9hrs (3pm), where we bathed our feet in the rivers. The cold water on our feet was amazingly refreshing!

Finally, we got back to the ‘never ending road’, and the skies also started to lighten up. As a parting gift, Nuang decided to throw 3 leeches simultaneously onto my legs, which gave me bloody socks and itchy scars. How annoying! (YK also got his share of leech bites along the way) My wet feet & toes were starting to become sore from constantly rubbing against each other, but we emerged out from the jungle and back into civilization at 4.40pm. Interestingly, besides my sore feet due to wetness, I was actually feeling not too bad – not as exhausted as I have been on some of my other climbs.

So, would I do Nuang again? Definitely yes! I’m in fact very glad I climbed Nuang in the rain, because (1) when you go outdoors, you’re bound to get wet sometime, and (2) I got to experience some things I wouldn’t otherwise have – for instance, the howling wind. It was quite an amazing wind. Of course, we didn’t see anything along the way, since the skies were just filled with clouds & mist. Hopefully when I go back, it’ll be on a clear day so that I can actually look out from Nuang! The trip was definitely worth it, and I think YK said the same, reaching the top after so many tries!

GPS Details (from start to summit)

Gunung Nuang, the highest mountain in Selangor, takes a person of average fitness (with regular exercise) 4-6 hours to summit, and 3-5 hours to descend (Total about 7-11 hours). I would not recommend it as a first climb (though it’s definitely doable if you’re reasonably fit) – try something like Bukit Kutu or Gunung Bunga Buah first.

For an 11hr climb, my _estimated _time to checkpoints (distances & elevations following my GPS):

Follow this ONLY as a guide! I recommend that however fast you are, to allocate at least a 12hr block for climbing, in case of any delays or bad weather.